Disruption as a business model

While evolutions and innovations remain in the logic of the previous system or product, disruptions break and fundamentally re-think technology, processes, market rules and mechanisms. So far the ideal and the hype. In practice, the boundaries are fluid and by no means all of the alleged disruptions are disruptive as their marketing promises. The undisputed example of disrupon is the replacement of horse and carriage by internal combustion engine and car. There have been similar revolutionary relapses, from the fire to letterpress printing to smartphones and apps. Disruptive innovations are thus historically not a new phenomenon. But digitization has accelerated the development of new business models - see, for example, the streaming services that deliver music, movies by subscription and made CD / DVD superfluous. Data and images are in Dropbox or Cloud and no longer on stationary hardware. 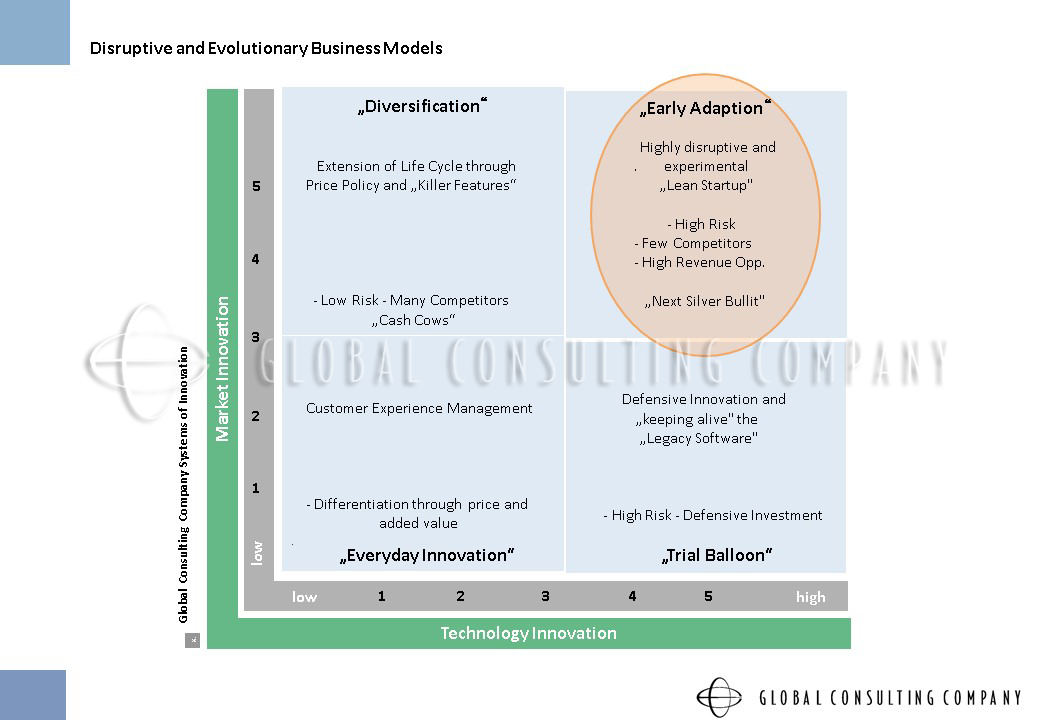 Disruption can also be enhancement

Superficially, established technologies or products are displaced or existing markets "destroyed". But one must be noticed: They still exist, the old products or services, in niches or sometimes even in the middle of the market. Occasionally they even experience a renaissance, such as the vinyl record. There are also hotel chains, TV stations and taxis, despite Airbnb, Netflix and Uber. After the hype about apparent "disruptions", these ultimately turn out to be "only" improvements to existing offerings - even in the digital economy. In that sense, the hype is sometimes exaggerated and even leads customers and potentials to switch off rather than to flag up, when they promote the next "disruptive" business model. But that does not necessarily make these business models worse. Many companies establish themselves in the diversity of the market and find customers that suit them.

After all, even the combustion engine and the car were historically "only" evolutions. The internal combustion engine actually continued logically, which started with fire and steam engine and the transmission of the technology for transport purposes is just as close in retrospect. This points to a phenomenon of many disruptions: In retrospect, the idea and the solution are so obvious that both, the customer and the competition are equally stunned that they did not think of it first. The tragic thing is: They usually do not do it. Or, as Henry Ford put it, "If I had asked people what they want, they would have said faster horses." Ford stepped out of the logic that seemed the only possibility to his contemporaries and introduced new techniques, rules, and modes of production. The result was groundbreaking.

How to use the concept

The example shows that the real revolutionary thing about disruptions is not necessarily the technical solution. Rather, the disruptive force arises from the fact that old ways of thinking and approaches to solutions were radically broken. This is where the potential of disruption lies. If you fundamentally question the given, you open your eyes to what is already there – but just not in the world. In other words, disruption really requires nothing more than a radical, sometimes "naïve" view of the world, of what it has - and of the ability to think "deviantly", of breaking up and leaving behind common logics and structural developments. This applies to founders, medium-sized companies and large corporations, where the fresh look for radical abbreviations is even more difficult after all the years of optimizing existing processes. Everything requires a clear focus on the customer. He gives the disruptive thinking, which at first is "destroyed", a direction to rebuild: Where is the customer annoyed by the previous solutions? How can I link existing things to make his life easier? What is the core need and what can I leave off (example Airline Ryanair)? What can I do so that my customer can solve his task even more conveniently? Etc.

GLOBAL CONSULTING COMPANY takes on new, creative perspectives, focusing on the customer's problem, making him the "boss". Design thinking, effectuation, new perspectives or innovative business models can help you to develop something fundamentally better. Whether you "destroy" your market, turn it around, or just build a viable business around your business model, does not matter. Your business model does not necessarily have to be "disruptive" - but successful! Talk to us.